Here are some important points about Unicode, UTF-8, and UTF-16 character encoding to revise or build your knowledge about character encoding, how characters are stored, and how to convert bytes to the character in your computer program.
You should remember there are many more character encodings available but we have only focused on UTF-8 and UTF-16 in this article as they are the most fundamental after ASCII, which many of you already know.
1. Unicode is a character set, which defines code points to represent almost every single character in the world, including characters from languages, currency symbols, and special characters. Unicode uses numbers to represent these characters, known as code points. Encoding is a way to represent them in memory or store it in a disk for transfer and persistence.
UTF-8, UTF-16, and UTF-32 are three different ways to encode Unicode code points. Here 8, 16, and 32 represent how many bits they use, but that's not the complete truth, which we will see in the next point.

2. There is a lot of misconception about UTF-8 encoding among software developers like UTF-8 always takes 1 byte to represent a character. This is not true, UTF-8 is variable-length encoding and it can take anywhere from 1 to 4 bytes.
In fact in UTF-8, every code point from 0-127 is stored in a single byte. On the other hand, UTF-16 can be either take 2 or 4 bytes, remember not 3 bytes. UTF-32 encoding has a fixed length and always takes 4 bytes.

3. There is another misconception I have seen among programmers is that since UTF-8 cannot represent every single Unicode character that's why we need bigger encodings like UTF-16 and UTF-32, well, that's completely wrong. UTF-8 can represent every character in the Unicode character set.
The same is true for UTF-16 and UTF-32, the difference comes from the fact that how they represent like the UTF-8 mostly takes 1 byte but can take more than 1, UTF-16 either takes 2 or 4 bytes, but it also suffers from endianness. 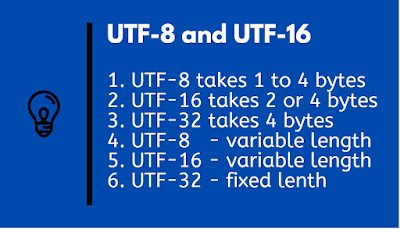 4. UTF-8 is the most backward-compatible character encoding, the original goal of it to generate the same bytes for ASCII characters. It can be passed through many tools intended for ASCII only, of course with few exceptions e.g. including avoiding composed Latin glyphs.

6. UTF-8 is the de-facto encoding for Most Mac and Linux C APIs, Java uses UTF-16, JavaScript also uses UTF-16. It is also a favorite encoding of the Internet, if you do a right-click and view-source of a web page, you will most likely see Content-Type: text/plain; charset="UTF-8" or.
The Internet Mail Consortium (IMC) also recommends that all e-mail programs be able to display and create mail using UTF-8. UTF-8 is also increasingly being used as the default character encoding in operating systems, programming languages, and various APIs.

8. UTF-8 is very space-efficient. It generally ends up using fewer bytes to represent the same string than UTF-16, unless you're using certain characters a lot (like for European languages), on the other hand, UTF-32 always uses 4 bytes, so it takes more space to represent the same String.


9. UTF-8 encodes each of the 1,112,064 code points from the Unicode character set using one to four 8-bit bytes (a group of 8 bits is known as an "octet" in the Unicode Standard). Code points with lower numerical values i.e. earlier code positions in the Unicode character set, which tend to occur more frequently are encoded using fewer bytes.
The first 128 characters of Unicode, which correspond one-to-one with ASCII, are encoded using a single octet with the same binary value as ASCII, making valid ASCII text valid UTF-8-encoded Unicode as well.


That's all about things every programmer should know about UTF-8 and UTF-16 encoding. Character encoding is one of the fundamental topics which every programmer should study and having a good knowledge of how characters are represented and how they are stored is essential to create global applications which can work in multiple languages and can store data from around the world.
Further Learning
Complete Java Masterclass
Java Fundamentals: The Java Language
Java In-Depth: Become a Complete Java Engineer!
Thanks for reading this article so far. If you like this article and my explanation then please share it with your friends and colleagues. If you have any questions or feedback then please drop a note.
javin paul
Share