How to replace a substring in Java? String replace() method Example Tutorial

Another important point to note is that the replacement starts from the beginning of the string and continue to the end, for example, replacing "aa" with "b" in the string "aaa" will result in "ba" rather than "ab" i.e. it's left to right replacement. Let's see some code examples and important points about replacing a substring in Java.

And, If you are new to the Java world then I also recommend you go through The Complete Java MasterClass on Udemy to learn Java in a better and more structured way. This is one of the best and up-to-date courses to learn Java online.

Since replace() is overloaded in java.lang.String class, you need to choose the right one for the job. For example replace(char oldChar, char newChar) is used to replace characters on String. You need to use the replace(CharSequence target, CharSequenece replacement) method to replace the substring in Java.

Let's see some important things about this replace the function of java.lang.String class.


1) The replace(CharSequene target, CharSequence replacement) method replaces target with replacement in the String object it is called on e.g. "Faster".replace("er", "est") will make "Faster" to "Fastest".


2) Apart from String, you can also pass StringBuffer and StringBuilder to this method because they also implement the CharSequence interface.


3) The replace(CharSequence t, CharSequene r) starts replacing substring from the beginning and proceeds towards the end. So if you call "bbb".replace("bb", "c") then output will be "cb" and not "bc" because it will replace first "bb" with "c".


4) This method will throw java.lang.NullPointerException if either target or replacement is null.


5) You can only use this method to replace a substring in java from JDK 5 onwards because it was added first in Java 5 only. It's not available to the earlier version of Java.

7. Don't forget to store the result into a Separate String object, since the String is immutable in Java this method cannot change the original String. For example, can you guess what this program will print:

To your surprise, this program will print "Effective Programming" even after you have called the replace() method and it succeeded. The reason being String is final in Java, so you cannot change the String object once created. Any change in String will create a new String object. If you look at the signature of the String method, it returns a replaced String but if you don't store it in a variable then it will be lost.

This is a very common error made by Java programmers and then they complain that replace() method is not working in Java, you might have seen a lot of forum posts on this topic already.

The right way to use the replace method is the following:


Please see Java: A Beginner's Guide by Herbert Schildt to learn more about how to do String manipulation in Java.

Java Program to replace a substring

Here is our sample Java program which will teach you how to use the replace() method of java.lang.String class to replace a substring in Java. It has three examples, first is normal substring replace, second shows that this method replaces all occurrences of the substring, and third shows that this method starts replacement from the beginning and proceeds towards the end, rather than doing right to left replacement.

You can see that replacement of the substring worked as expected as Effective Java is changed to Head First Java by replacing the substring "Effective" with "Head First".  We have also tried both numeric and text substring just to show that it works for both kinds of data, any way, they are actually String.

By the way, there is another way to replace substring or characters in a given String, by using StringBuffer or StringBuilder as shown below: 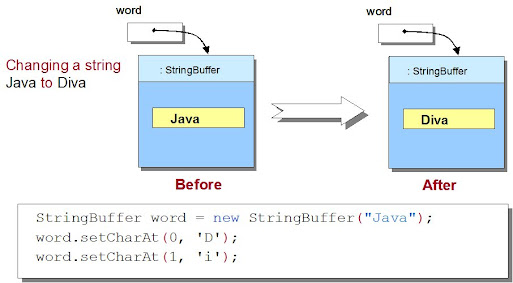 This method doesn't create a new String and replaces the character into an existing String, so if you want to change the same String object, you can use the setCharAt(int index) method to replace characters in String. In order to replace the substring just replace more characters.


That's all about how to replace a substring in Java. You need to use the replace(CharSequence target, CharSequence replacement) method. You can pass String, StringBuilder, or StringBuffer to this method because they all implement the CharSequence interface. Just remember that it starts replacement from the beginning but replaces all occurrences of a substring.

Other Java String tutorials for Programmers

The only problem with this method is that it's only available from JDK 5 onward. If you are still maintaining JDK 1.4 codebase then you need to write your own method or you need to look at some alternatives at the Apache Commons library.  If you are new to Java, I suggest you also build your fundamentals by reading a good core Java book like Java How to Program by Dietel and Dietel or joining these core Java courses.
javin paul
Share