Hello guys, if you want to become an iOS App developer and looking for a solid roadmap then you are not alone. I was also looking for iOS app developer roadmap when I stumbled upon this awesome looking iOS developer RoadMap on Reddit. This is one of the comprehensive roadmap to take your from zero to master in iOS App Development but its also too much comprehensive and hard to follow. To be honest, I cannot learn all the skills mentioned in this RoadMap unless I spend all of my time on learning them for another 5 to 10 years. So, I created a simplified version of my own iOS developer RoadMap where you only need to learn essential skills to start doing iOS Development and start your career as iOS App developer.

The iOS operating system is developed by Apple company back in 2007 as the main system for their electronic gadgets like iPhone, iPad, and other phones and it was closed source meaning only Apple company have the access to their system code for developing it.

Considering the popularity of iPhone, iPad and other Apple gadgets it make sense to learn iOS development as it will help you secure both job as Mobile application developer which is the second largest job pool after frontend engineers as well as to work as freelance app developer as every app needs iOS version.

The company offers the developer two main languages to develop apps that work on their system which are objective-c & swift and this article will help you see the roadmap to becoming an iOS application developer.

Here is the iOS App developer roadmap I was talking about in the first paragraph. This is one of the most structured, guided, and comprehensive roadmap to truly become a master iOS Developer but its hard to follow and you really don't need to learn everything given in this roadmap to start your career as iOS developer and that's why I have picked the essentials from this roadmap and created my own which you will find in this article. 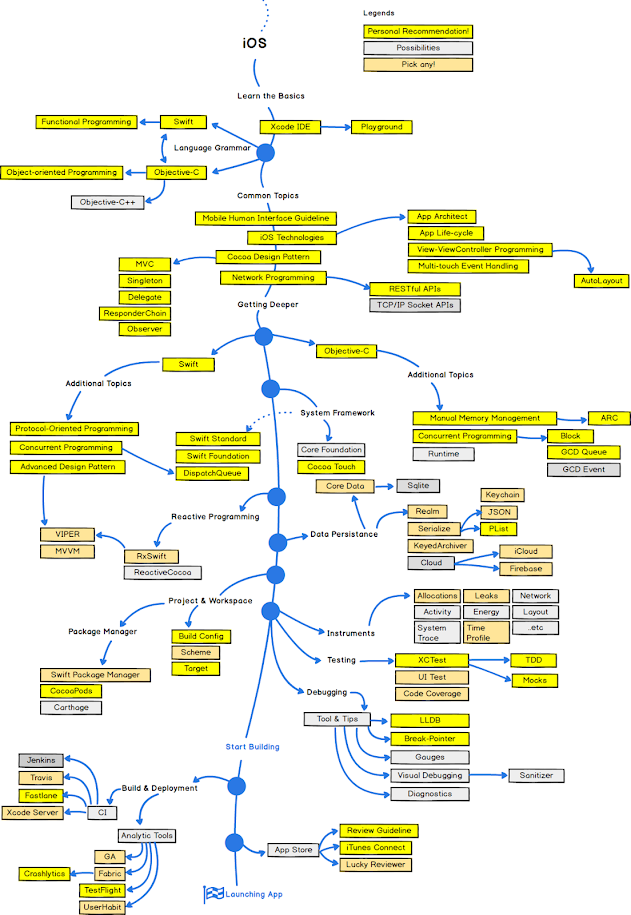 Many programming languages are used to develop iOS apps, but we will stick with the famous and most used languages for this purpose: objective-c and swift. Let’s discuss each language and its learning resources:

1.1. Objective-C: this is a general-purpose & object-oriented language used a lot among developers who want to develop apps for macOS iOS and their systems. Objective-C is formed on top of the C programming language.

1.2. Swift: this language was developed by Apple company, and it is used mainly for creating apps for their systems which are macOS, iOS, Apple OS, and Apple TV. Swift is robust and considered a general-purpose, multi-paradigm, and compiled language.

Learning how to create apps for Apple products is an excellent skill to have, specifically if you want to make money through apps. It would be a better option to learn the objective-c language before jumping into creating their apps since the system used this language to run and will be good to understand it for developing native apps that run correctly on their devices:

2.1. Foundations of Objective-C: this course is for beginners who want to learn objective-c for apps development. You will start this course by understanding the tools you will use, such as Xcode IDE for developing the apps writing the code and writing a simple code of objective-c. Then you will learn to create functions in objective-c and learn encapsulation of variables, objections, and libraries you will use for the apps.

3.1. Introduction to Programming in Swift 5: this course will teach you the basics of the Swift language by installing the Xcode IDE then learning how to use variable strings working with numbers. You will also learn conditional logic, arrays, loops, dictionaries, functions, and object-oriented programming. This course can be your introduction to the Swift language, so later, you can jump into using it to develop apps for Apple products.

Apple apps only use the local database to store the data. So if you want to be an iOS developer, you need to learn to use the database inside your apps and develop their design to work correctly for the user. Sometimes you don’t need to store the data on the app, but almost it is required in most of the apps:

you will learn how to design a relational database without knowing the SQL language or any programming skills to develop one. You will discover many things such as the data modeling process, database design, identifying entities for the tables & attributes, and more.

There are many courses to learn developing iOS apps, but I want to recommend these two courses from two different platforms, which are Udemy and Coursera platforms:

5.1. SwiftUI Masterclass 2023: this is a massive course to develop iOS apps using the Swift language. It contains more than 30 hours of video content, and you will develop 15 iOS apps. You will learn animation in the swift language, long press, control interface, develop an outstanding setting view, create a pho gallery, and much more.

5.2. iOS Development: another excellent course teaching you to develop iOS apps developed by the University of California Irvine. You will start learning objective-c language basics and then make your apps connect to the network and receive notifications. You will discover also to develop good UI design for your apps and learning developing apps using Swift.

Thanks for reading! This was an overview of the roadmap for an iOS developer, and you need to practice more to become an advanced apps developer. You can also learn other frameworks such as Flutter & React Native to write one code for generating apps for iOS and Android.


Thanks for reading this article so far. If you like this iOS app development roadmap then please spread the word and share with your friends on social media. I appreciate your kind support.