How to implement Selection Sort in Java? Example Tutorial

Hello guys, if you are wondering how to implement selection sort algorithm in Java then you are at the right place. In the past, I have taught you how to implement Bubble Sort, Quick Sort, Merge Sort, Insertion Sort, Radix Sort, and Counting sort and in this article, I am going to teach you how to implement the Selection sort in Java. Along with above mentioned sorting algorithm, Selection sort is another essential Sorting algorithms which every Programmer should be aware of. This sorting algorithm is a combination of searching and sorting, and its also very intuitive especially if you have sorted things in your daily life.
As the name suggest, it select the minimum number in the array or list and puts it into its correct position. It repeats the same steps on unsorted part until the whole array or list is sorted. It's an in place algorithm which means there is no additional space is required, but the time complexity of selection sort is O(n^2) which means you cannot use this algorithm to sort a large array.

How the Selection Sort Algorithm works?

The space complexity of the Selection Sort Algorithm is O(1) because its an in place algorithm and no additional space is required. When it comes to time complexity. It takes a quadratic algorithm which means it take O(n^2) time. This also means that as the number of elements (n) in the array increased the time to sort the array also increased exponentially which makes it unsuitable for sorting large arrays.
Here is a nice diagram which explains how Selection sort algorithm works: 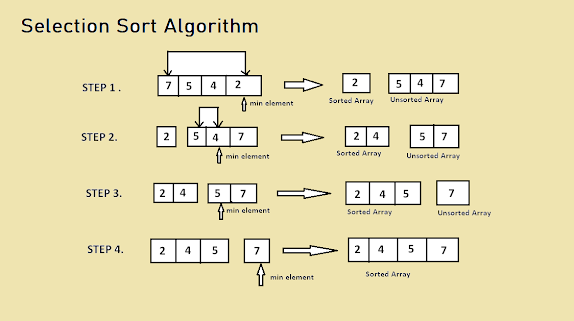 How to implement Selection Sort Algorithm in Java

Thanks for reading this article so far. If you like my implementation and explanation of the iterative Quicksort algorithm in Java then please share with your friends and colleagues. If you have any questions or feedback please drop a note.
P. S.- If you want to improve your data structure and algorithm skills  then I suggest you take these best data structure and algorithms courses to quickly revise all important sorting algorithms concepts before your interview.
javin paul
Share