10 Examples of Joining String in Java - String.join vs StringJoiner

It's quite common in day to day programming to join Strings e.g. if you have an array or List of String let's say {Sony, Apple, Google} and you want to join them by a comma to produce another String "Sony, Apple, Google", there is not an easy way to do it in Java. You need to iterate through an array or list and then use a StringBuilder to append a comma after each element and finally to remove the last comma because you don't want a comma after the last element. A JavaScript-like Array.join() method or join() method of Android's TextUtils class is what you need in this situation. Still, you won't find any such method on String, StringBuffer, StringBuilder, Arrays, or Collections class until Java 8.

Now, you have a class called StringJoiner which allows you to join multiple String by a delimiter.

A join()  method is added into the String class to convert an array of String or a list of String joined by a delimiter of your choice. In this article, we'll see a couple of examples of joining String in Java 8, which will teach you how to use both StringJoiner and String.join() methods.

10 Examples of Joining Stream in Java for Beginners

Without wasting any more of your time, here are examples of using Stringjoiner class and the String.join() method to join multiple strings by comma, colon or any other separator in Java.

The JDK 8 has added another text utility class called StringJoiner in java.util package. This class allows you to join arbitrary String by a delimiter. It also allows you to add a prefix or suffix by providing overloaded constructors.

Here is a couple of examples of joining multiple Strings using StringJoiner class:

Here is an example of joining a number of String by comma in Java:


You can even shorthand the above code in one line as shown below:


From these examples, you can see how easy it has become to join multiple String in Java 8. You can also see these Java 8 online courses to learn more about the StringJoiner class. These courses will help to learn miscellaneous enhancement done in Java 8 with a brief summary and useful examples, which is very handy for a busy Java programmer.

JDK 8 also added a convenient join() method on java.lang.String class to join Strings. This method internally uses StringJoiner's class for joining Strings. There are two overloaded versions of the join() method, one which accepts CharSequence elements as variable arguments, so you can pass as many String, StringBuffer, or StringBuilder as you want.

This is used to join any number of arbitrary String as it accepts individual String as a variable argument, so you can pass as many String as you want.

The second version of join() accepts a CharSequence delimiter and Iterable of CharSequence, which means you can use this to join a list of String or an array of String in Java.


3. Joining a couple of String

Here is an example of joining any arbitrary number of Strings using the String.join() method. The second argument is variable arguments which means you can pass any number of String as you want.


You can see that we have combined three String by space by using the String.join() method; no loop was required. 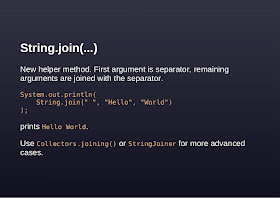 4. Joining all String from an array

Now, let's see how we can join all String elements from an array in Java. Before Java 8, we have to loop through an array and use a StringBuilder to append all elements into one and then finally convert that to String using the toString() method.

Now, you don't need all that; just pass the array and a delimiter of your choice to the String.join() method, and it will do that for you.

You can see that all three elements of the array are joined together and separated by the delimiter, semi-colon, in our case.

Joining all elements of a list in Java is not very different than joining elements from an array. You can pass not just a List but any Collection class unless it's implementing an Iterable interface.  The same String.join() method is used to combine elements of List as it was used for array in the previous example.


You can see the result is a long String containing all elements of the given list, and each element is separated by a comma, the delimiter we have passed.

JDK 8 also provides a joining Collector, which you can use to join String from a Stream, as shown below.

You can see that all elements from the Stream are combined using commas as instructed to joining Collector.  See these Java Stream API Courses learn more about Streams and Collectors in JDK 8.

7. How to Join String in Java 7 or Before

There is no built-in join() method on the Java version before Java 8, so you need to write your own or use third-party libraries like Google Guava or Apache commons and their StringUtils class join String. Alternatively, you can use this method to join String in Java 7 and earlier versions.

You can pass this method a List of String and a delimiter of your choice; it will return a String where elements of a list are joined by a given delimiter.

Our complete sample Java program demonstrates how you can use both StringJoiner and String.join() method to join multiple String objects by a separator.

Other Java 8 tutorials for busy developers:

Thank you all, If you have any questions or doubt, feel free to ask in comments.
javin paul
Share